Liquid Adhesive Glue or Tape Adhesive which is better?

There are a lot of various reasons why some people prefer liquid adhesives over the tape and vice versa. They both have their pros and cons that we’ll dive into in this article. Depending on your lifestyle and preferences, finding the right attachment method is crucial in providing the look you want.

But before we discuss whether tape or liquid adhesive is better let’s look at some of the factors to keep in mind when committing with one over the other.

Now that you know what to look for in an adhesive let’s look into the pros and cons for both tape and liquid.

Tape is very versatile and it can be used with many different base materials. It is also less damaging to the hair replacement system. The ease of applying tape is the same ease in removing it when it is time to clean up the hair system. Sometimes, you can remove the tape adhesive by just peeling it right off the hair system. This of course usually depends on the tape and base it’s being used on.

Tapes are much easier to attach because they are very forgiving, especially during the wig installation process. You usually just place the tape where you need it to go, attach, and let it cure as you have the hairpiece on. If you make a mistake, there are certain sprays you can loosen up just a tad bit and then move it to where it needs to go.

It is also best for sensitive skin. Tapes aren’t typically flammable. Therefore, they’re a great option for those who have skin sensitivities. There is a reduced exposure to chemicals which results in less fumes being inhaled and less chemicals being used.

Tapes are a lot easier to ship tape around the world. Since tapes aren’t typically flammable there are more options provided for the tapes to be shipped into different parts of the world or just around North America. Most couriers look at flammable products as a liability and there’s a higher chance that the shipping cost will reflect that notion.

Since the tape is an easier method to remove, sometimes wearers have the tendency to just pull their hair system right off with the tape. Which could cause damage to your natural hair when removing it. Also, if the adhesive isn’t completely removed, it can cause durability issues in the reattachment procedure. The hair replacement system may not last as long compared to the first time it was attached.

Also, tape usually has a straight edge and is about 8-10 mils thick which can be visible, mainly in the front hairline. Especially in the early stages of the curing process, as the tape hasn’t softened the edge will look thicker than it should be. This may cause an unnatural looking hairline. In addition to the possibility of tape looking unnatural, it typically has a shine that is noticeable with certain bases and will most definitely shine through with much lighter densities.

The best and most favourable factor when it comes to liquid adhesives is their strength. They are much stronger than tape and most wearers feel more secure using Liquid adhesive because of this.

Liquid (Glue) Adhesive, provides more of a precise attachment as well. It is typically placed on the scalp with a brush or spatula using an even layer. The wearer can determine and precisely pinpoint where the adhesive needs to go. Which gives it the possibility to leave no room for any air or spaces that could cause the hair system to slip if water were to seep through.

Due to the precision of the glue’s placement and the super-thin layer, it can provide a very natural hairline. This makes the hair system look more natural as the liquid adhesive acts as a layer of thin skin.

When the liquid adhesive dries out, it leaves little to no shine which is a great option for those light density wearers.

Liquid adhesives can actually run a bit if not applied properly and they do take some time to dry before applying the hair replacement system. Which means, the attachment process can take a much longer time compared to the process time when using time. The application for liquid adhesive requires a few layers and drying time in-between the layers. Due to this process, if the adhesive is too dry or the hair system is placed on when the glue hasn’t cured at the right time, you may not get the bonding on correctly.

Of course, since liquid adhesive does require some extra time and effort to attach, the same goes for when it’s time to clean. It is a lot more difficult and lengthy to remove glue on a hair system as you would need to soak the hair in solvent for a much longer period of time. Also, removing the adhesive requires brushing, which also can cause damage on the base if it’s done aggressively. Liquid adhesives are not at all easy to clean.

Here is the summary of both the tape and liquid adhesive: 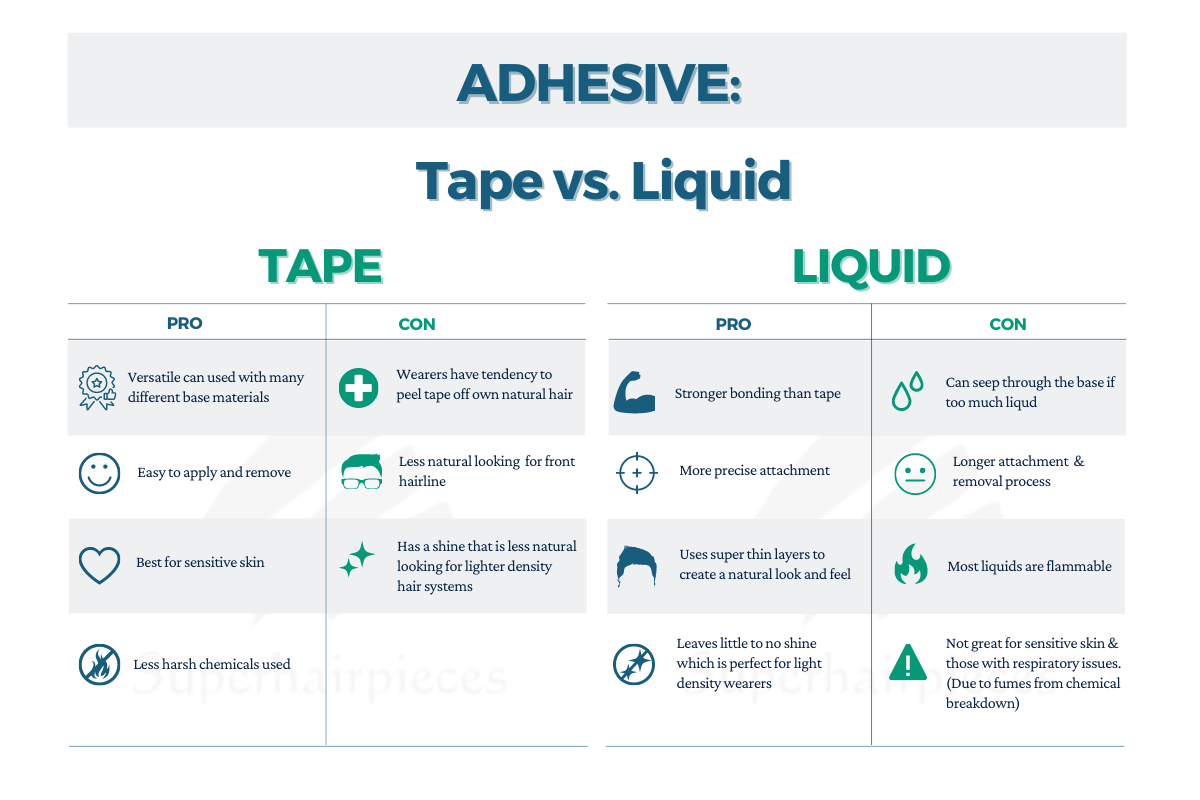 Stay up to date on the latest SHP news, events and new product launches.