Hair loss is a problem that affects men worldwide. After all, it is believed that as much as 80 percent of men can suffer from significant hair loss during their lifetime. To be part of that 20 percent is a blessing only a few are gifted with.

But having said all that, it's always interesting to learn which countries deal with hair loss more than others as well as what factors could have potentially played a role. If you're also interested, you're in luck as we'll be looking at the baldest countries in the world in this blog post. Top spot will definitely surprise you!

Note: This information is as per a 2011 survey conducted by TripAdvisor Japan. The data may not be accurate as of the time of writing.

As far as Asian countries go, there aren't any in the top 10 which seems to indicate that Asian men deal with male pattern baldness, or androgenetic alopecia, far less than their European or American counterparts. One reason could be the diet…but if that's the case, why is Japan the baldest Asian country with 26.78% of men dealing with hair loss? Isn't Japan known for having a very healthy diet overall which is why they have one of the lowest obesity rates?

A major factor could be the salt or sodium content in Japanese dishes. High levels of salt can cause sodium deposits around the hair follicles. This prevents the necessary nutrients from reaching the follicles which could eventually cause hair loss. Something to think about when you're ordering Ramen next time.

Mexico is known for its amazing food, music, beaches and rich culture. You can also add bald men to that list as the only Latin American country to feature on the list has 28.28% of its men dealing with hair loss.

Interestingly, it is believed that Mexicans that have descended from Spain are more likely to experience balding than those with Native American or sub-Saharan African genes. You will find out why that's significant later on in this list.

The Land Down Under is not immune to male pattern baldness, either. According to the survey data, 30.39% of males in Australia deal with balding. Other than genetics, diet could be a major reason as the Australian Bureau of Statistics found that 67.0% of Australians aged 18 years and over were overweight or obese as of 2018. A poor diet or lack of nutrition can be one factor, but there could be plenty of others at play including stress and the environment.

READ: Alopecia, misconceptions and how to combat it

It's not only Russia prime minister Vladimir Putin who is dealing with male pattern baldness. A number of Russian men do as well which is why Russia comes in at number 11 with 33.29% of men dealing with some form of hair loss. That means one in every three Russian men. Given the color of their hair, perhaps they could benefit from a European hair men's toupee.

Unfortunately for many Canadian men, they have to deal with that extra bit of cold during the winter. That's because the Great White North sees 37.42% of its men going bald which is more than one in three men. This is not particularly ideal for that harsh winter weather, but they can always opt for hair replacement systems as a solution.

Those in the Greater Toronto Area can also book an appointment at the Mississauga location of Superhairpieces to get their hairpiece installed, cut and styled. For a limited time, they can also get $40 off their first installation. Call Superhairpieces Canada at 416-800-5056 while slots are still available!

Check out our GTA local services

The Netherlands is known for its infrastructure, windmills, tulips and canals, but little do you know they also have a good percentage of male balding. According to the data, 39.23% of Dutch men are or have lost their hair.

Not everyone looks good bald, and if you're a Dutchman who is part of that list, consider purchasing a high quality 100% human hairpiece from Superhairpieces Netherlands!

Poland sees 38.84% of its male population suffer some type of hair loss. If you're one of them, don't be disheartened. You can always wear a toupee like Superhairpieces client Krzysztof who can now sport a full head of natural-looking hair thanks to his M100 monofilament top with poly hair system!

Art, cheese, wine, architecture, fashion, opera, and bald men are all things that can be associated with the nation of Italy. Approximately 39.01% of Italian males deal with hair loss and even with their good looks, it can take a toll on their confidence and youthful appearance. However, hair replacement systems can be a great solution for any Italian man looking to instantly regain a full head of hair again.

This shouldn't come as a surprise. That not only being the USA featuring on any list, but the fact that the Land of the Free has one of the largest rates of balding with men. According to TripAdvisor, 39.04% of American men are dealing with balding.

Further proof comes from how many of the world's famous bald men all hail from America. The likes of Jeff Bezos, The Rock, Michael Jordan, Mike Tyson, and Bruce Willis to name a few all come to mind. Not to mention the many celebrities who dealt with their hair loss in a variety of ways.

The United Kingdom comes in at number five with 39.23% of British men dealing with hair loss and balding. Just like the USA, this shouldn't come as a surprise. You're bound to see bald Brits just about everywhere whether it's in soccer, television or politics. Let's not forget the monarchy either as both Prince William and Prince Harry have also succumbed to the effects of male pattern baldness.

There are loads of famous Frenchmen who are bald or balding such as Zinedine Zidane and Jean Reno to name a few. That's probably a good thing as 39.24% of the male population deals with balding.

Many in France seem to embrace the bald look. For the rest, they can always opt for other hair loss solutions such as hair transplants, prescription medicine or even hair replacement systems. The good news is they can get all the hairpieces they want thanks to Superhairpieces France. No more ordering from abroad and having to worry about customs or import fees!

Germany makes the top three with 41.24% of males dealing with balding or hair loss. Of course, if there's one thing to associate with Germany, it's beer. That's not to say every German male drinks nor is there any scientific link between drinking and hair loss, though binge drinking can cause follicles to dry out and eventually thin.

But there can easily be other factors in play such as the diet of the average German male and unlucky genetics in general.

Spain luckily misses out on top spot by coming in at second in the most baldest countries in the world. The exact number is 42.6% of Spanish males dealing with some form of hair loss. As for why they are so high on the list is anyone's guess.

It could be deep-running genetics, environmental conditions or overall stress within the population. According to eachnight.com, Spain is notably one of the most stressed countries in Europe. Each or a combination of these factors can all play a role in Spaniards losing their hair.

We did say number one would be a surprise. The Czech Republic has as many as a staggering 42.79% of men who deal with baldness. Certain experts claim the diet of the average Czech man is the main culprit as it usually consists of meat-heavy meals, salty foods and sauces, and a lack of daily vegetable consumption.

You can view the infographic from TripAdvisor below: 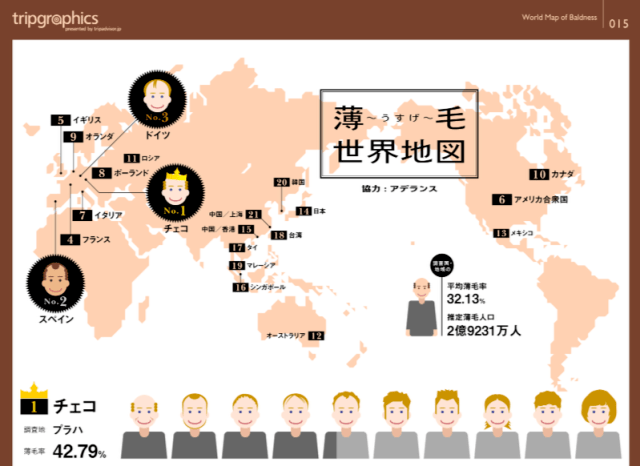 Interested in learning more about getting started with hair systems? Browse through our website at www.superhairpieces.com (US & International) or superhairpieces.ca (CAN)